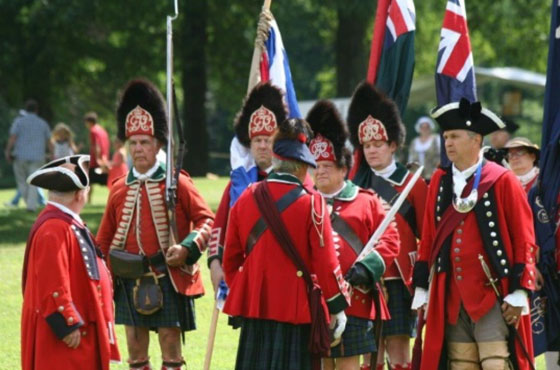 The Court House, the tavern across the street, and the lawns around them, are a beehive of activity today. Soldiers stopping here to rest before marching on gather in small groups to chat among themselves or flirt with the ladies who follow their regiment from camp to camp. A group of local supporters makes musket balls nearby to send with the soldiers. Herr Spengler, a German wagoner who pulled into town this morning, swaps stories with a soldier about life on the road. The smells of food and wood-smoke waft from the hearth of the summer kitchen behind a neighboring house. A child darts among the crowd rolling a hoop, while bubbles of laughter erupt from small clusters of children playing other games. Two teenagers lounge over a checkerboard under the shade of an old tree. A musician hunkers down, providing the crowd with impromptu entertainment. Children and adults alike gather where a puppeteer sets up his stage. Artisans and craftsmen set up shop where they can. They weave baskets, work yarn, labor with pen and ink over a Fraktur. A gunsmith, tanner and distiller display their wares to the people gathered around them. The tink-tink of tin decoration punctuates the air. People scurry in and out of the buildings and tents, and over the lawn. Look — George Washington just popped his head out of his tent over at his headquarters!! 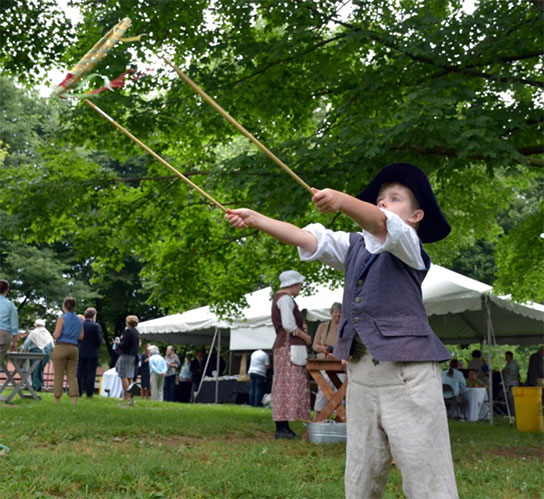 Did we just travel back in time?

This weekend, if you visit our Colonial York Day, you just may feel like you have! This Saturday, join us at the Colonial Complex between 10 a.m. and 4 p.m. to see how people lived, worked and played in the colonial era. Everything described above and more will be on display — and all for free!! There will be hands-on activities as well as demonstrations, so come on down to get your colonist groove on. If that’s not enough for you, the Colonial Courthouse, and the first floors of the Golden Plough Tavern and General Gates House will also be open for free.

Several groups of American Revolution and French and Indian reenactors will make a rare local appearance for the event, so don’t miss this opportunity to see them right here in York! Three regiments of Revolutionary-era Continental Army troops, including the Donegal Rifles, as well as their female “camp followers” will be in attendance. Personally, I can’t wait to hear about the role that women played in the Revolution. Camp followers cooked and did laundry for the troops, served as nurses, and even pitched in on the battlefield when casualties were high and more hands were needed. As with all wars, some of these women provided “personal comfort”, so to speak, to soldiers.

Also at Colonial York Day will be two regiments of French and Indian War reenactors: the British Muskets of the Crown regiment, and the American Associators and Townsfolk. While you’ve heard a lot about the American Revolution, no doubt, you probably haven’t heard much about the French and Indian War. This often overlooked war was actually the North American theater of the Seven Years War (1754-1763), which could arguably be called the “real” World War I. During this bloody, turbulent era of world history, nascent European nations vied to become the dominant colonial power. The Americas, Africa and Asia, as well as Europe, were drawn into this contest for world domination. Greedy for land, natural resources, people, power and money, these nations, their surrogates and adversaries set the world into a tailspin that would lead not only to the formation of the United States, but also to other new nations and colonial outposts around the world, the effects of which are still felt throughout the world today.

Make no mistake: reenactors aren’t just folks who like to spend their weekends dressing up in historical costumes and camping out at historical sites. They steep themselves in the history, becoming one-man and one-woman experts in their historical period of choice. Because they often make the clothing on their backs and the tools of their trade, and adhere religiously to living authentically according to the practices and customs of the period for that day or weekend, they often can speak knowledgably about daily life in that era. The reenactors joining us this weekend don’t just read lots of books about the colonial era — they actually live colonial life on a regular basis. In my opinion, they’re the ultimate history nerds, knowledgeable about just how hard colonial life was, something books can never tell us. I, for one, want these tough, self-sufficient guys and gals at my back for the zombie apocalypse.

This Saturday, you’ll have the opportunity to learn about the colonial era from a veritable army of historians, so come on down to the Colonial Complex to see first-hand how grit and determination built America.