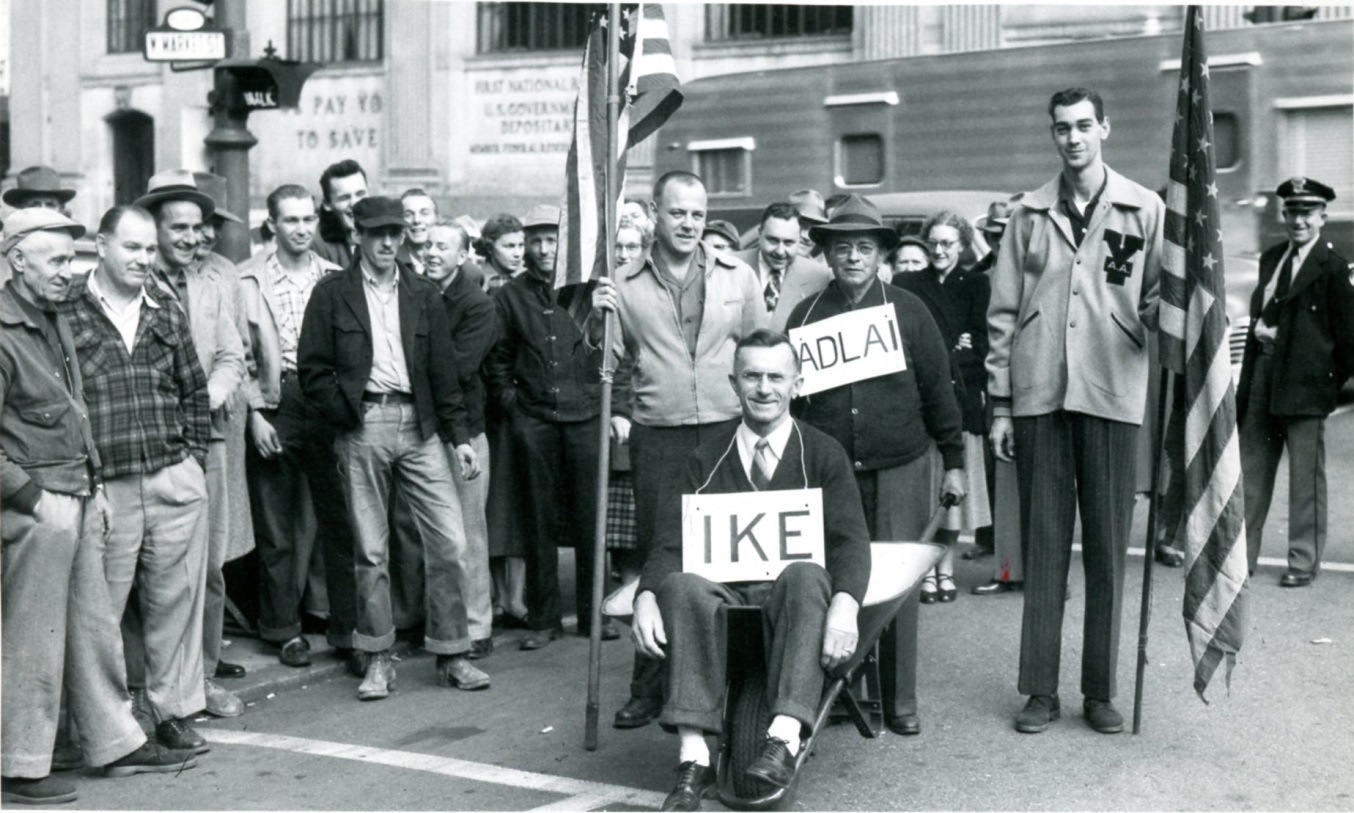 This photo from the York County History Center’s archives is from the 1952 presidential race between Dwight D. Eisenhower and Adlai E. Stevenson, which the former Allied commander won by a landslide, the first Republican to take the Oval Office since 1932. Ike and Adlai supporters made a bet, with the defeated candidate’s supporter hauling the winning candid
ate’s supporter through Centre Square in a wheelbarrow for all of York County to see. Did Stevenson’s supporter move to Canada, hurl insults at his “opponent”, begin preparing for the end of times, or otherwise throw a hissy fit? No. Instead, he upheld what Eisenhower and the thousands of men who served under him had fought and died to protect: the democratic process, the peaceful transfer of power, and the freedom to continue lobbying your cause in our nation’s halls of power without fear of retribution or personal harm.

Being a good loser is something that has disappeared in today’s political climate, along with the practice of taking the long view, or employing the historian’s gaze. Putting the events, issues and political players of today into historical context helps us understand that even if our candidate didn’t win today, the issues they stand for are still on the table, still up for debate, still worth fighting for. “Progress,” however we define it, doesn’t happen overnight. It happens after many long years, often decades or centuries, of persistent work, the proverbial drip of water that eventually carves a canyon. Taking the long view also encourages us to learn about other people, movements and civilizations similar to the ones we find ourselves in today, to learn from them, to try not to repeat the mistakes of the past, and perhaps to recreate the successes of others who’ve gone before us.

Jon Meacham, the Pulitzer Prize winning author, editor, presidential historian, and political commentator, will his give insights on how our history informs our nation’s future at this year’s Distinguished Speaker Series, which will be held at Wyndham Garden York on Thursday, November 3rd at 6:30 p.m. Meacham’s talk will center on the theme America Then and Now: What History Tells Us About the Future. With his appearance occurring just prior to the election, we look forward to his observations and analysis of this year’s presidential race. Seating is limited, so visit our website today to order tickets. Proceeds from the Distinguished Speaker Series will support Mr. Meacham’s session with high school and college students earlier in the day, and will also help fund the planning for our future History Center campus. Don’t miss this opportunity to hear one of America’s most prominent public intellectuals speak right here in York.

Are you interested in learning more about your personal connections to history? Do you have an ancestor who served in the U.S. military? Mustering Up Your Family History, a genealogy conference sponsored by South Central Pennsylvania Genealogical Society and the York County History Center, can help you get started. The conference will be held on Saturday, September 24th from 8 a.m. to 4:15 p.m. at the Historical Society Museum, Library & Archives. This year’s conference features two workshop tracks: a series of general genealogy workshops for folks who are just getting started on their research (or experienced researchers who’d like to brush-up on their skills), and a series of military records workshops for individuals are would like to learn more about their ancestors who served in any of the military conflicts in our nation’s history. An impressive line-up of guest speakers will lead the workshops, and the day will begin with a presentation by key note speaker Ronald L. Hershner, author of Letters from Home: The Civil War Correspondence of a York County Family. Visit our website to register, and for details about the day’s schedule and workshops. Registration includes a buffet lunch.