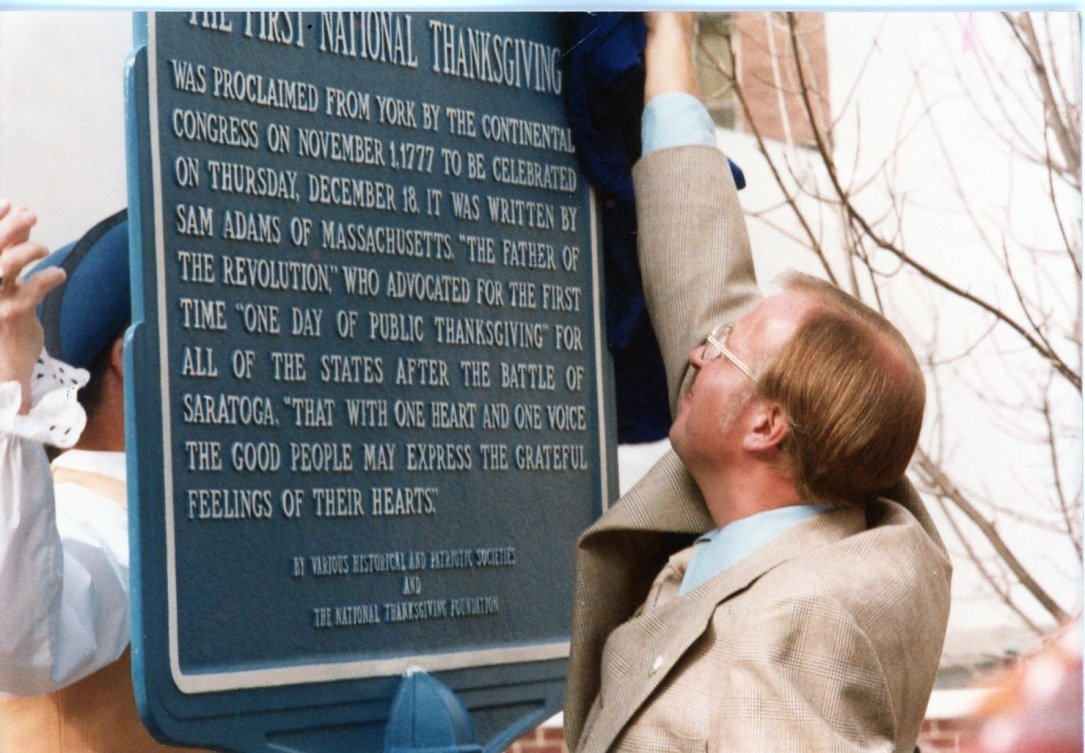 Did you know that York County was home to the very first nationally celebrated Thanksgiving? On November 1, 1777, the Second Continental Congress, which was convening in York following the British capture of Philadelphia, proclaimed a national day of Thanksgiving to celebrate the American victory at the Battle of Saratoga right here in York.

Saratoga was a decisive victory for the fledging country. The Continental Army had been in retreat since the British capture of Fort Ticonderoga in July 1777. In August 1777, Washington appointed General Horatio Gates (namesake of our Gates House) to lead the Northern Department, and over the course of two battles in late September and early October, the Continental Army stymied the British plan to drive a wedge between the New England colonies and the middle-and southern-colonies. American losses were light compared to British losses, and the British learned that, contrary to earlier dismissals of the untrained, volunteer recruits, the American army was a force to be reckoned with and would not easily be defeated. When word of the Americans’ success at Saratoga reached King Louis XVI of France, he began negotiations with the Americans, resulting in a formal Franco-American alliance, and shifting the war to a global dispute. The American Revolution, therefore, became one of many smaller wars in a long, ongoing battle between the rising European powers that began with the Seven Years’ War (and arguably much earlier) and would continue well into the 20th century with the great World Wars.

A plaque memorializing the first national Thanksgiving proclamation stands on the north side of the first block of East Market Street between the M&T Bank building and the York City parking garage, generously donated by various historical and patriotic societies, and the National Thanksgiving Foundation. If you’ve tried to find the plaque recently and were unsuccessful, the plaque had been removed for much needed cleaning and restoration, and was recently reinstalled.

What will you be thankful for this Thanksgiving? If you count the York County History Center or your York County heritage among your many blessings, please consider a donation this upcoming Giving Tuesday on November 29th. Giving Tuesday started in 2012 in contrast to the consumer glut that is Black Friday and Cyber Monday, providing a way for people around the world to contribute to non-profit organizations that make our communities and world a better place to live. Your Giving Tuesday gift this year will help us start a fund that will help fund field trips for kids whose schools are not able to afford admissions and buses for transport. Just $6 pays for one student’s admission, and $300 will cover a bus! Learn more here.  Unable to contribute a monetary gift? We ‘re always seeking volunteers to aid us in our mission. Volunteers play a vital role at the History Center, giving tours, helping with special family programs, sitting on committees and our board, sharing their expertise through presentations and workshops, lending a hand with fundraisers, conducting research, assisting with cataloging, digitizing archival materials, answering researchers’ questions, and much, much more. There’s something for every interest at the History Center. If you’d like to become a volunteer, fill out an application (https://www.yorkhistorycenter.org/about/volunteer-opportunities) today to get started!

Once you’ve digested your turkey and pumpkin pie, it’ll be time to get ready for Christmas. Planning to come Downtown for the annual Light Up York (http://yorkcity.org/LightUpYork) on Friday, December 2nd to sing holiday tunes and see the gigantic tree on Centre Square illuminated for the first time? While you’re here, check out our special Lantern Tours at the Colonial Complex between 5 and 8 p.m. You’ll get a chance to see the Golden Plough Tavern and General Gates House in a new light during half-hour lantern tours led by guides in period costume. Visitors will get a rare opportunity to experience the first and second floors of these historic structures in period lighting, setting the tone for a peaceful, relaxing holiday season. Best of all, the Lantern Tours are free to the public, but free-will donations are greatly appreciated.

Start your holiday season with these special events right here at the York County History Center!