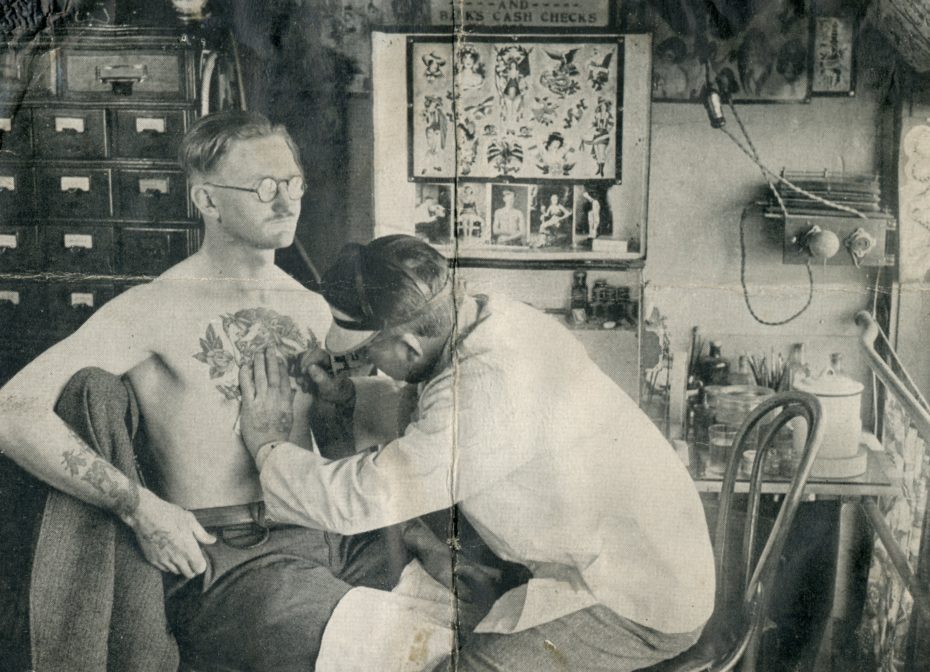 If you had the chance to stop in to Marketview Arts last month, you may have seen the History Center’s Pop-up Exhibit titled “Local Ink.” The exhibit features a collection of over 300 individual objects related to the work of local tattoo artist Ray K. Miller.

Ray began tattooing as a teenager in the late 1930s and worked the South Central Pennsylvania carnival circuit. He would rent out a booth space, load up his roadkit and flash panels, and set up for a weekend or two at one of the various carnivals throughout the region.

Ray came into the business at the right time – tattoo equipment was relatively easy to procure and their popularity made for easy business. He was able to order the parts to actually assemble a kit (the tattoo machines, the rheostats, cables, etc.) and the inks, needles, and even artwork. Most of what Ray used appears to have been ordered from Percy Waters or the Chicago Tattoo Supply House – two of the largest suppliers in the 1930s, 40s, and 50s.

Being an accomplished artist wasn’t a requirement. While Ray did draw many of his own designs, by most standards they would be considered primitive and amateurish. If you visit the exhibit, it is not hard to tell which flash panels were done by Ray and which panels were purchased. The term “flash” is given to the individual tattoo designs and they were often displayed on boards or in binders for customers to look through. The exhibit includes five original flash panels, three examples of purchased panels, and a large binder that can be paged through digitally. Another fun item is Ray’s price book, which is also available to view digitally. The pages include prices ranging from 15 cents up to $5.00 for a full-chest, three horse head design.

A frequent question is whether the enlarged photograph that is featured behind Ray’s roadkit is of Ray. Unfortunately, we do not have any photos of Ray while he was tattooing and very few that show his tattoos. This particular photo did come from Ray’s collection. He had cut it out, possibly from a magazine, and pasted it to one of his flash panels. It obviously served as inspiration to Ray and gives us a window into tattooing during that time.

Even though the exhibit at Marketview Arts closed on July 9th, you’re not out of luck! It has been reinstalled on the Mezzanine at the History Center’s Historical Society Museum and will run until September 9th. It is part of your regular admission, which includes all of the History Center’s museums and historic sites. Take this opportunity to check out this interesting bit of local history, and if you have any questions or know more about Ray please contact Rachel Warner, Curatorial Collections Manager, at rwarner@yorkhistorycenter.org or ext. 212.