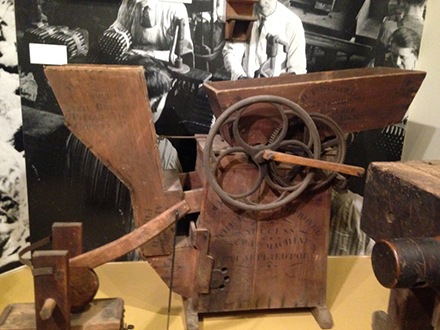 Diary of a Genealogist

This letter, received recently by History Center staff, was written by Wendy Coons, a member and genealogy researcher. The letter is published with her permission.

I recently found a receipt in a notebook from July 22, 2004 for $5 for the York County Heritage Trust Museum (good reason for the re-branding). It was for admission to the Library for one day. I remember in that one day the staff helped me locate the Raab family file, which was a large accordion file with all kinds of newspaper clippings for anyone with any spelling of that last name, such as Robb, Rabb, Rabe, etc. After about two hours I finally found my great grandmother’s obituary, which had her married last name spelled as Raub. She died in 1924 at “37 years and 6 days old.” Back then, obituaries really told you something, with the last sentence of her obituary stating, “Mrs. Raub underwent an operation several months ago at the York hospital for the removal of a 32-pound tumor.” I kind of liked finding that information in her obituary, before health care privacy protection via HIPAA. A nurse practitioner told me that kind of tumor was likely ovarian cancer; good information in development a family medical history.

The Library staff also helped me find the 1920 census, where I was shocked to read that my great grandmother was listed as her future husband’s servant, with her first child from another man listed as a boarder. The ‘head of household’ was 22 years older than she. I learned that the U.S. Census is far from being a dry list of numbers and names.

The obituary also stated “the funeral cortege will proceed to Red Lion cemetery, where interment will be made.” On a different day I drove around, praying about where that cemetery could be, when I saw it and fairly quickly found her headstone. Later one of my aunts took a photo of it and put that and a copy of the obituary in her family records, with another piece of the puzzle found, and so far all it cost was $5 and a few hours.

Fast forward to 2017, when I was interested in the History Center again, this time due to a riveting Second Saturday lecture by “author Judy Wolfman, who recounted the true story of Henry “Box” Brown, a slave who shipped himself from Virginia to Philadelphia in a box half the size of a coffin.” (https://www.yorkhistorycenter.org/better-future-welcome-2017)  Shortly after that I became a member and attended the two day Underground Railroad Symposium with another friend who was already a member.

Around that same time I was looking for more information in the Library again and talked to Jan Barnhart, only to find out we shared a common ancestor, Benjamin Franklin Strickler. I learned some more researching techniques that day from Jan and from Becky Roman, and the staff also copied my information to put it in the Library’s Wagner family file. The aunt I mentioned earlier passed away a few years ago, but she had copied for me a letter that my grandfather ‘Pap’ had sent to another aunt in Georgia when she asked him to write down his life history. It’s a copy of a five-page hand-written letter, with some gems even from the first sentence, “I was born in Baltimore I was told (and this makes me a Rebel). Brought to Red Lion by my mother and with a signed paper was raised in the home of Agnes Ott and William Ott. The paper stated I was to stay with the Otts until I was 18 years of age. I stayed until I was 24 years old when I married your mother…and worked for my father in law a bit and farmed where we live now…let someone else do the farming and got a job in Thonet Industries, a furniture manufacturer…” There was also a copy of a hand-drawn map with the letter, showing the Wagner Homestead, and included in the drawing were “Raymire’s Hollow” and “expressway.” I was surprised to learn that the staff were interested in copying my information for the Library Wagner family file. I’m so glad the staff at the History Center create these family files!

As a result of becoming a member back in March of 2017, I received two complimentary one-day guest passes in the mail, like a bonus! Finally, today, October 28, 2017, a sunny, 70-degree day, I took my parents to the museums and historic sites. We started at the Museum at 250 East Market Street, where upstairs in a corner we saw a “Scrap Machine c. 1900, B. F. Strickler.” It was an invention of my 2nd great grandfather, Benjamin Franklin Strickler! “B. F. Strickler invented this machine to shred tobacco leaves for use as cigar filler. The filler was known as ‘scrap’.”

Next we toured the Colonial Complex, then ate lunch at Coffee, Teas, and Thee, LLC on the way to the Agricultural & Industrial Museum. In that museum, we saw displays by Thonet Industries, where Pap worked, and also Frazer Farm Equipment (rototiller), where my other grandfather worked. That job was the reason his side of the family moved to York, PA from Meriden, Connecticut.

I just wanted to write this as an example and encouragement to other people so that they understand that family history ‘research’ at the History Center doesn’t require a high level of expertise. The staff are very helpful. The displays are easy to read, and even  walking through the museums may inspire the sharing of information not previously discussed in a family. Some articles may make family history research seem daunting, but family history research can be as simple as looking through a family file or walking through the museums…thank you, York County History Center!