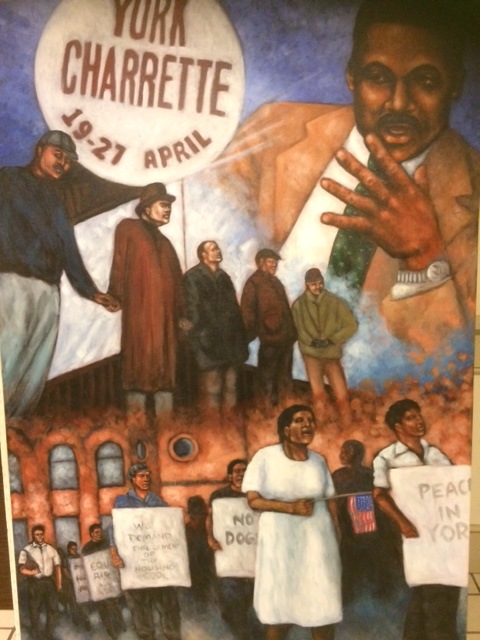 York in the 1960s was awash with racial tension. Like many small cities, York experienced rioting, gang violence, and increasing crime, resulting in grave concern about safety and the future of our youth.

In a bold move toward positive change, the York Charrette, Inc. was formed, a York County council created to address these racial and social issues.

According to Raul Urrunaga’s article in the 2011 Journal of York County Heritage, many charrettes were held in cities around the country. He called it “a comprehensive approach to solving the societal ills that plagued inner-city York for decades…”

As the History Center moves into the coming months and observes Black History Month, we look back at this 1970 effort and all that it accomplished.

The sessions were held in the Bond Sanitary Products warehouse office space, at the corner of King and Queen St. (now The Bond). The location, says Urrunaga, was ideal, “just blocks from the commercial center of York and in the middle of a residential area, facilitating easy access to stakeholders and participants.”

Out of this new council came the York Health Corporation (today Family First Health), and the York Housing Development Council (which became Delphia Management Corporation). A youth group called the “Get-It-Together Club” was also formed, intended as a multiracial social group. It was short lived, however, and was disbanded in August, 1970 because of student misconduct.

A 3-panel mural, painted by York artist Brett Greiman, depicts a number of faces and scenes related to York and the civil rights movement. The mural is now part of the York County History Center collection.

In Raul Urrunaga’s opinion, the charrette “started the healing process of a terrible tragedy that loomed over the city for more than 30 years, until investigations into the murders of Lillie Belle Allen and Officer Henry Schaad ended with the convictions of white gang members and black militants. The Charrette should be of equal note.”

“No race riots occurred in the years following 1970, and the Charrette was a major factor in that peace…It did not solve all the problems of inequality, racism, and other incidents of racial tension, but it was a forum where people could confront root problems of violence and discrimination and formulate possible solutions.”

Raul Urrunaga received his bachelor’s and master’s degrees from Millersville University. The article referred to in this post was based on his master’s thesis. He is a social studies teacher in the West York Area School District.