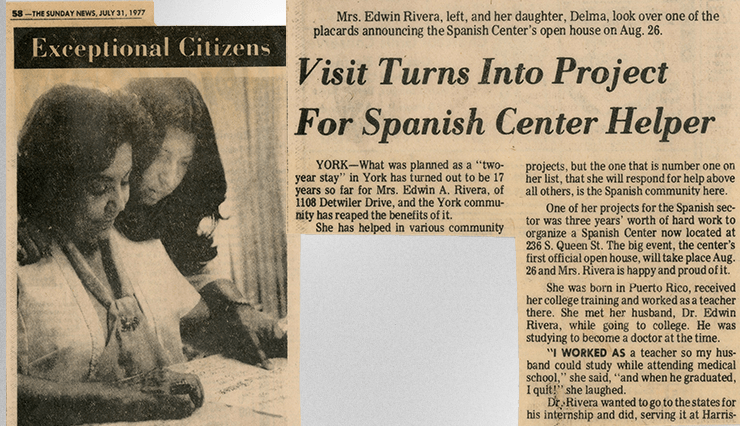 Since the Second World War, York County has undergone a significant demographic change. Agricultural and industrial jobs began to attract Spanish-speaking newcomers. People came primarily from Puerto Rico, but also from Mexico, the Dominican Republic, El Salvador, and a number of other countries. When Latino immigrants arrived in the area, many had few contacts and knew little of the culture. Like earlier immigrants, they needed a stronger sense of community and mutual aid to help them succeed in their new home. In the early 1960s, a number of York residents responded to this need. Dr. Edwin and Delma Rivera, and Edwin’s cousin, Jose Hernandez, emerged as early leaders of the growing community. The Riveras recognized the need for translation services at York Hospital, as well as aiding those in need of housing. Hernandez served on the Community Progress Council and hosted the first Hispanic radio program in York County. He also worked as a translator for the York County court system and city police department–his son, Edwin, would become one of York’s first Latino officers. In 1974, the Riveras helped establish the Spanish American Center in York, located on S. Queen and eventually on E. Princess. Its functions are continued today by the CASA and Latinos Unidos organizations. The Riveras’ daughter, Delma Rivera-Lytle, serves as Diversity Education Specialist at Central York Middle School. The legacy of these early Latino leaders continues on in York County today.