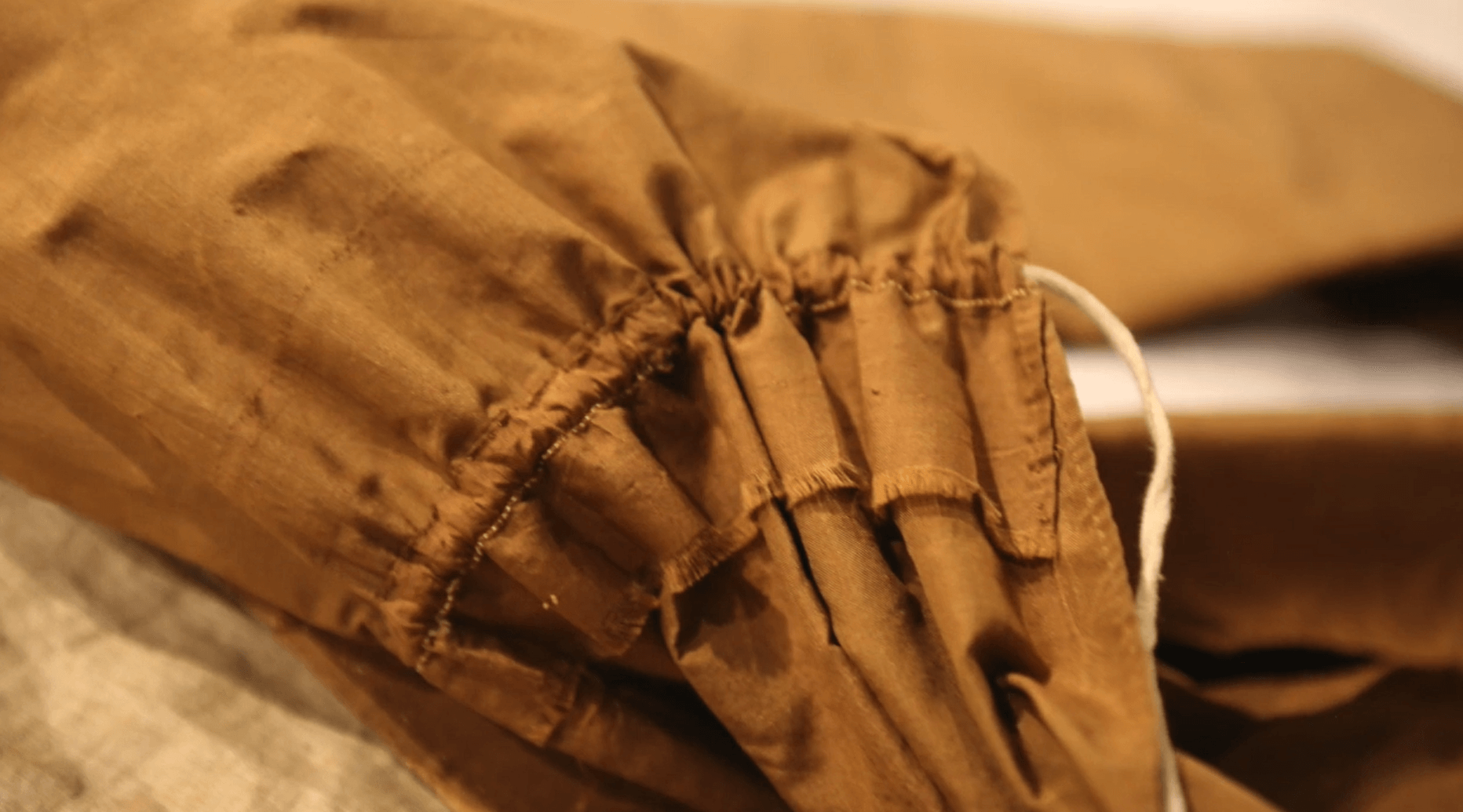 The York County History Center collection includes almost 10,000 pieces of dress artifacts. Clothing is often saved for sentimental reasons, but we can learn a lot about a culture and society by how its people chose to adorn their bodies.   I’ve spent many hours with the History Center’s clothing collection examining garments using a process called the “Slow Approach to Seeing.”  This process “promotes looking carefully and thoughtfully, to appreciate all the evidence at hand” (Mida and Kim 2015).   One of the first garments that I examined was one of the oldest pieces in the collection, which was what initially drew me to it.  A copper silk taffeta gown made during the late 1790s, it has all the earmarks of being early regency (the Regency Era for fashion being 1790-1837), with the high waist and low neckline.  It is in rough shape though. The silk has worn away in some places and there is extensive staining and fading from both perspiration and sunlight.  But as I looked at the seams, construction, and even the staining I realized that this gown had been refashioned and remade, meaning that the fabric had been made into a garment earlier than 1790 in a different style.  Then, as styles changed, it was taken apart and remade into the version we see today.  This was a common practice in the 18th century.  Materials were expensive and labor was cheap.  Realizing what I was seeing was exciting and I’ve since spent about 8 hours examining this one dress.  Every time I discover something new.

When looking at an antique item of clothing we often imagine the individual that wore it, what it says about them and the culture of the time.  As someone who sews, and prefers to sew by hand, I also think about the individual that made it.  It is a common misconception that women of the 18th and

19th century sewed all the clothing needed for their families.  It’s also a common misconception that because York was in the Pennsylvania “hinterland” fashion and style here were very far behind the times.  Fashion marketing has been around for hundreds of years.  Fashion plates became common in the 18th century. They were often sold by subscription to the very wealthy, who wanted to be on the cusp of fashion, and to dress-makers, often called Mantua-Makers, who needed to keep up with the styles of the time to attract and keep business.  In the 19th century, several Ladies Magazines kept their readers informed of changing styles.

Before the invention of the sewing machine, Mantua-Makers were female entrepreneurs.  These were women with skills that owned their own businesses and often employed other women to do the less skilled work.  It was an opportunity for women to be independent and move into the upper classes of society.  “It is reckoned a genteel as well as profitable employ, many of them living well and saving money” (Waller 1747).  In York County dressmakers were at their trade well into the 19th century.  The census of 1860 lists no less than 49 women in York who gave their occupation as mantua maker.  I like to think of these women as the first “lady bosses”, creative and skilled women that in some measure were in control of their own lives and managed their own businesses.  Considering fashion as part of our Year of the Woman programming might seem superficial, but when we frame clothing in the context of “by women for women” business it suggests something very modern and timely.

Watch our video series with Christine now.  Follow along as she recreates a piece of clothing from our collection.