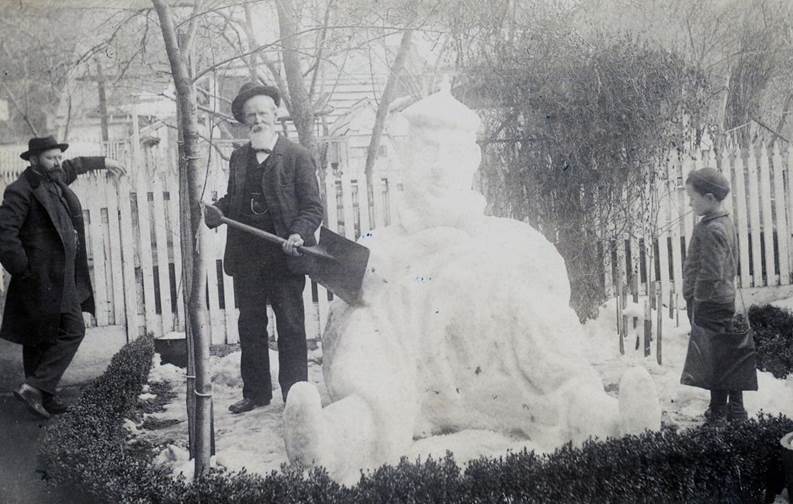 York Countians have long been a creative bunch. Lewis Miller was a prolific chronicler of life in the early Republic, his drawings widely recognized as a national treasure for capturing our country at an important political and socio-economic crossroads. David Heckert, a contemporary of Miller, was known in his elder years as a local eccentric about town. He produced drawings in a style similar to Miller’s, but with his own unique flare. On the occasion captured in this photograph, he snow was his medium of choice. What started as a huge sculpture of three men was re-formed into this sculpture of one man as the snow melted. York County has spawned a number of nationally recognized artists, including painters Horace Bonham and Stephen Etnier, furniture and cabinetmakers John Fisher and John Rupp, and more recently, writer Rita Mae Brown and sculptor Jeff Koons. Not to mention a whole host of potters, musicians, fraktur scribes, quilters, bakers, smiths, architects, entertainers, poets, and artists of every form and medium, known regionally and nationally for their work.

York Countians have particularly excelled at creative endeavors in what Melvil Dewey called the “useful arts”, what we now refer to as the STEM fields. Examples of these accomplishments abound at our Agricultural and Industrial Museum. S. Morgan Smith, a local Moravian minister who began tinkering with an improved washing machine after watching his wife toiling over the laundry, later built a manufacturing power-house that produced agricultural and industrial equipment, including water turbines. S. Morgan Smith Company was later acquired by Allis-Chalmers, and eventually Voith Hydro, the world’s leading manufacturer of hydroelectric turbines. The S. Morgan Smith Company was one of many York County manufacturers involved in the York Plan, an innovative approach at converting peace-time manufacturing to war-time production quickly and efficiently in the build up to World War II. The York Plan was taken up by the federal government, and replicated in manufacturing centers big and small across the nation. In addition to a special exhibit on the York Plan, the Agricultural and Industrial Museum features many examples of S. Morgan Smith Company products, as well as the products of other manufacturers involved in the York Plan. While you’re there, also check out the Bob Hoffman exhibit. Hoffman was an early leader in the national competitive weightlifting arena, turning a bankrupted barbell manufacturer into the York Barbell Company, whose products are used in gyms and competitions around the world. He also developed and promoted a wide range of products aimed at giving Americans healthier lifestyles, and was an instrumental figure in the country’s burgeoning fetish with health and fitness.

Rather than tucking in to a long winter nap after the holiday hoopla is over, why not visit the Agricultural and Industrial Museum? The next two weeks will be your last opportunity to check out David Lynch’s art installation, “We Can Build This City”, a six-foot tall cardboard replica of York’s cityscape, a special commemoration of York City’s 275th anniversary.

Need to get the kiddos out of the house while they’re on break and going stir-crazy? Family Day on December 28th at the Agricultural and Industrial Museum from 10am to 1pm is the perfect solution! This year’s theme is Build It!, so not only can your family check out examples of our creative past and present, they can roll up their sleeves and get creative themselves at a number of activity stations. Folks from Martin Library, Cultural Alliance, and Creative York are joining our museum staff this year to provide exciting new activities. Your kids can get ready to ring in the New Year by making noisemakers, party masks and party “slime”. They can try their hand at making a house, log cabin, or marble race from a wide range of fun materials, or let their imaginations run wild to come up with their own creation. Kids can add their building to a paper town, so at the end of the day they’ll have helped create an entire community! Kids didn’t get that pony or puppy they’d been hoping Santa would bring them? They can make a pet rock! When your youngsters need a break, there will be music and storytelling from local performer Matt Dodd. This is just a sampling of the special activities that will be on hand at this year’s Family Day, so we guarantee fun for the whole family. Best of all, Family Day is free! All you need to bring is your imagination. See you there!!!

Regardless of what you’re celebrating in the coming weeks, we wish you and yours a joyous and safe holiday season!