Masking Policy: For vaccinated guests, masks are optional in the general areas and gallery spaces. In the smaller spaces such as the Library & Archives masks are required by all guests. Anyone unvaccinated is still required to wear a mask for the health and safety of our volunteers and staff. For additional information, please call 717-848-1587. 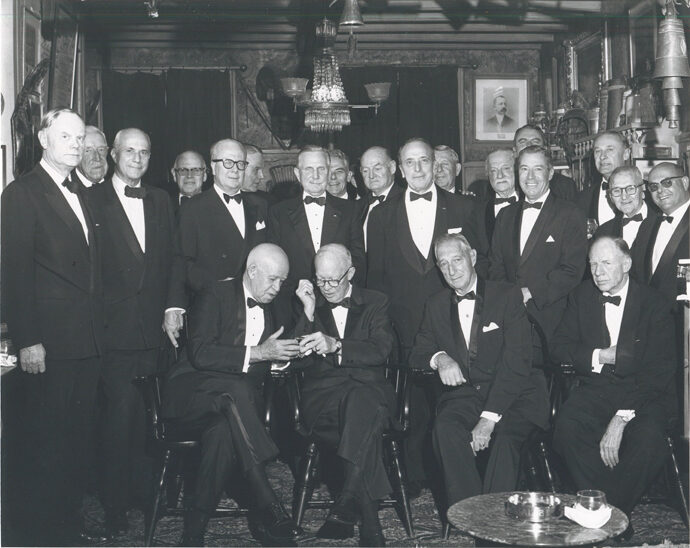 From the Archives, 1967: Key players in top-secret WWII operation gather on 25th anniversary 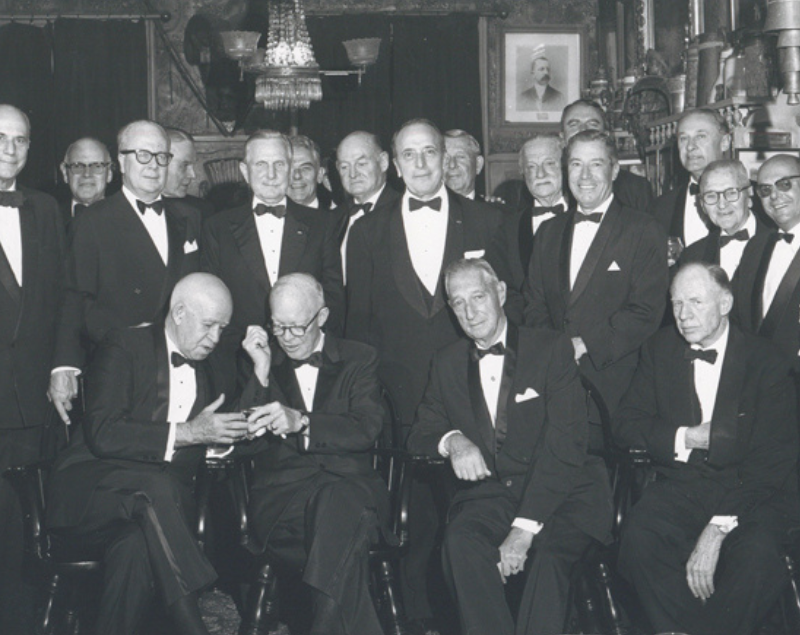 Jacob Devers, seated second from right next to Dwight Eisenhower, was one of 23 men
to attend the 25th reunion of the leaders who coordinated the liberation of North Africa
during World War II. Devers, a York County native, was the second in command under
Eisenhower in the European theater.

Fifty-five years ago in November 1967, 23 men filed into a small, private dining room at Washington D.C.’s Alibi Club. The club was founded in 1884 by a group of “distinguished Washingtonians” as a private social institution for D.C.’s elite.

The nondescript brick row house at 1806 I St. NW, with its traditional green shutters and door, was an no stranger to such meetings. Designed as a retreat from “the vicissitudes of domestic life and the rigors of business… in the pursuit of happiness in comfortable surroundings among convivial friends,” the anonymous three-story building was a haven for the powerful socialites, diplomats, politicians, generals, and businessmen it counted among its members.

Of course, there were only 50 members in the Alibi Club — a number determined by the clubhouses’ compact dimensions. At 1400 square feet, it was reportedly all the building could accommodate. Notably, club regulations stipulated that for a new member to join, another had to die.

The members tended “to be men of an age who no longer worry about what they’re going to be when they grow up,” one journalist observed in 1992. This included Supreme Court justices, secretaries of state, CIA directors, secretaries of war and defense, doctors, lawyers, and “innumerable supreme military commanders.”

It was this latter group of Alibi Club members — and their renowned acquaintances — who chose the venue for a memorable dinner on this day a little more than a half-century ago.

It was a black tie affair. Dressed in tuxedos and bow-ties, the men filed into the building, winding past historic cannonballs and tiger skulls and cuneiform tablets and ceremonial swords and paintings of drunken sailors on leave — “all those things our wives wouldn’t let us keep at home,” one member claimed — into the first-floor dining room.

Laid out like “a tavern of the 16th century,” the room’s dark wood paneling, fireplace, ornamental plates and other decorations surrounded a massive table and thirty Windsor chairs in the center of the room. The men found their seats, smiling and excited to catch up and reminisce.

Twenty-five years earlier — to the day — each of the men seated around the table played some role in the Anglo-American invasion of Vichy French North Africa. When they met that evening to commemorate its 25th anniversary, many of the details surrounding the event were still top secret.

At the center of the table, “grinning broadly and obviously delighted in the comradeship of old friends,” was former U.S. President General Dwight D. Eisenhower. As Supreme Allied Commander on Nov. 8, 1942, when Allied forces went ashore in Morocco and Algeria, Eisenhower had been the principal figure in Operation Torch — a true baptism by fire in what ultimately became a remarkable career as an Allied commander.

Seven years after relinquishing the mantle of president and less than two before he would die of congestive heart failure, Eisenhower looked relaxed and excited to visit with his many friends and acquaintances—many of whom themselves enjoyed long, successful careers after the war. 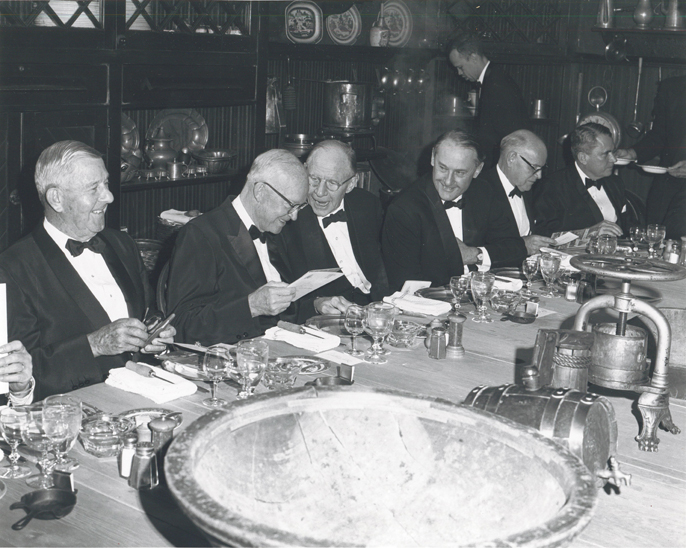 Seated to Eisenhower’s left was Robert Murphy, a stoop-shouldered diplomat from Milwaukee who, as FDR’s primary representative in North Africa prior to Operation Torch, acted as a key intermediary between Allied forces and the French ashore.

For years prior to the Nov. 8 landings, Murphy had built an extensive network of collaborators to try and facilitate the landings. He would later go on to play a crucial role as a civilian chief of the political affairs section at Eisenhower’s Mediterranean headquarters and beyond, eventually becoming Under Secretary of State after the war.To

Eisenhower’s right was Gen. Jacob Devers, the second highest-ranking American general to serve in Europe during World War II, second only to Eisenhower himself. Sporting a perennial smile that bespoke boundless charisma behind his humble personality, Devers would replace Eisenhower as a deputy Allied commander in the Mediterranean in early 1944 before commanding an army group in southern France and Germany by the end of the war.

Seated at the table was Gen. Mark W. Clark, fresh off his presidency at the Citadel, a military school in South Carolina. Clark had been Eisenhower’s deputy commander-in-chief during Torch, a towering figure, literally, who eventually became commander of the U.S. Fifth Army in Italy and, after the war, commanded UN troops in Korea. 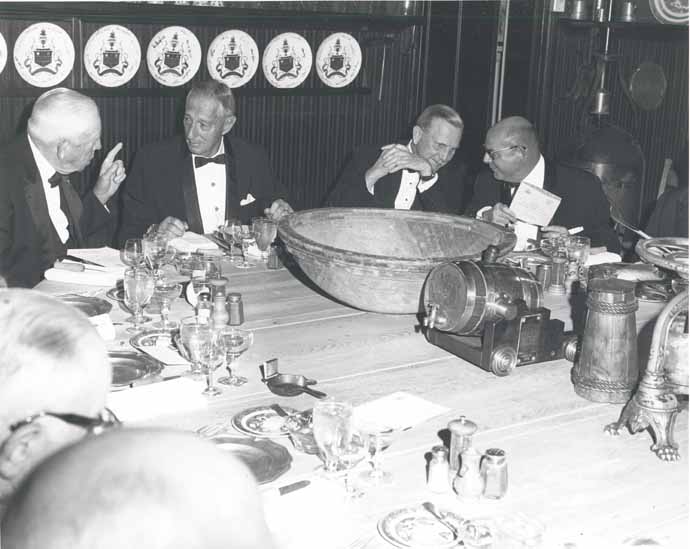 There was also Gen. Lyman Lemnitzer, then-commanding NATO after serving as chairman of the Joint Chiefs of Staff. During the war, Lemnitzer was a capable officer and operations planner on Eisenhower’s Allied staff, a man who, with Clark and several others at the table, had gone ashore in Algeria as part of a secret rendezvous to try and secure French assistance prior to the Torch landings. The effort was easily “one of the most bizarre episodes of World War II.”[1]

Amazingly, Lemnitzer surprised the dinner party with his plus-one: Flying in from his NATO post in France, he brought with him a French farmer by the name of Jacques Tessier, the very man who had offered his home as the site of the secret underground meeting and who, when local gendarmes were alerted to strange behavior at Tessier’s Algerian coastal home, had hid Clark, Lemnitzer, and their party in his wine cellar.

The man who took them ashore, a daring American submariner named Adm. Jerauld Wright, was also seated at the table. As a prominent Alibi Club member until his death in the 1990s, he was the reunion’s principal organizer. “Not a word was leaked about it,” Wright, the ex-Ambassador to Taiwan, said later. “That’s how we wanted it,” said Gen. Omar Bradley, Eisenhower’s close friend and faithful subordinate who went on to achieve five-star rank.

It is amazing today, now 80 years removed from Operation Torch, to catch a glimpse of the event’s principal participants and organizers celebrating their own reunion 25 years on.

Rather than rehash their roles in that human drama, it seems most were just excited to be together again.

“It was so top-secret only Gen. Eisenhower had the whole story,” Bradley later told a reporter. “And there was no need to rehash all that. We simply had an evening of fellowship.”

Carson Teuscher is a Ph.D. candidate specializing in Military History at Ohio State University. His doctoral research evaluates how the Allied coalition in the Mediterranean during World War II evolved from experimental Anglo-American origins into a complex and capable multinational military organization between 1942 and 1943.