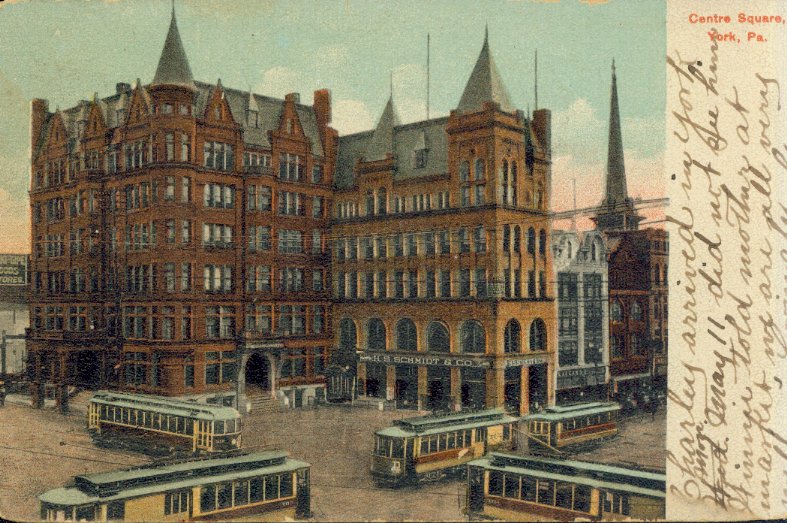 North meets South, and East meets West in York County, Pa.  Stories of wilderness, settlement, immigration, and innovation are just some of what we share on guided tours at the York County History Center. Whether you have one hour or several, choose from up to five museums, all with their own focus and atmosphere. Please visit our Museums page for descriptions of each site and hours of operation.

We are happy to welcome groups to our museums!  We also have virtual tour options for your group, organization or club.  Please contact groups@yorkhistorycenter.org  for the latest information.

Minimum 10 people, must schedule three weeks in  advance.   If you have questions, please contact us.

$7.00 Combination of sites or site plus walking tour

On a visit to the Agricultural & Industrial Museum, agricultural artifacts produced or used in the county over three centuries include locally made wagons, a tractor, steam engines and farm tools.  Working industrial exhibits include a 72-ton A-Frame ammonia compressor, made in York in  1907, and used to manufacture large blocks of ice that lined railroad cars for the meatpacking industry in Wichita, Kansas. A water powered, three-story gristmill has been recreated, complete with grinding stones. Exhibits on Pfaltzgraph pottery, casket manufacturing, dental supplies, piano and organ manufacturing, as well as York’s industrial contribution to World War II are also featured. Air, Land, & Water: Transporting People & Products, housed in our 12,000 square-foot transportation wing, includes York manufactured automobiles, a Conestoga wagon, a York trolley car and a 1937 Aeronca K airplane.

The Colonial Complex is a collection of restored and reconstructed buildings reflecting York’s early history . The Golden Plough Tavern, a Germanic half-timbered building built in 1741, is the oldest structure in the City of York and served York residents and travelers into the mid 1800s.  General Gates House (c. 1751) was the temporary residence of General Horatio Gates, newly appointed president of the Board of War. The Barnett Bobb Log House dates to 1812 and is currently used during programs for artisan demonstrations and hands-on activities. All three buildings contain period furnishings, textiles, tools and utensils. The Complex also includes the reproduction of the 1754 Colonial Court House, created to represent the headquarters of the Continental Congress, which met in York from September 1777 to June 1778 and adopted the Articles of Confederation.

This museum emphasizes the breadth of York County history from its earliest settlement through the turn of the century. The first floor of the museum includes a Street of Shops with a one room log cabin, print shop, an apothecary, and a millinery. York County tall case clocks, decorative arts and furniture, original drawings by local artist Lewis Miller, and the community exhibit A Place to Call Home is featured on the second floor. a comprehensive exhibit that covers York County history from its beginnings to the mid-nineteenth century and includes the Susquehannock Indians, the American Revolution, and the Civil War. Temporary exhibits highlight specific York contributions and events.

Built in 1840, this three-story dwelling was purchased by artist and prominent Yorker Horace Bonham in 1875. Visitors to the Bonham House will learn about the Bonham family and the evolution of the structure that reflects the changes in society between the 1870s and the 1960s. While Horace trained as a lawyer, he spent most of his life as a painter of portraits, landscapes and genre scenes. Several of his works are displayed in the house.

Located in the 1903 Royal Fire House, the museum allows visitors to see how York firefighters worked, lived and played. It holds more than 225 years of firefighting equipment, representative of the 72 fire companies of York County. Objects on display include 6 fire trucks ranging from the 1920s to the 1950s, 19th century hand-pumped equipment, stalls for the fire horses, alarm boxes, parade uniforms and photographs.

All walking tours are guided and typically last about 1 hour, and cover approximately 1 mile.

The locations of the museums and historic sites of the York County History Center are in the oldest areas of York City, near the heart of the revitalized downtown area.  Each tour has it’s own focus, and most include York’s historic Continental Square. Tours return to the site from which they depart.

When the British captured Philadelphia in the fall of 1777, the Continental Congress made York the capital from which  it would conduct the war, and take the first step toward creating the United States as we know it. Guides will share stories of local heroes, as well as national notables such as George Washington, and “Mad” Anthony Wayne. Included in this tour is the site of a duel that was to take place between General Horatio Gates and James Wilkinson.

Many of the  buildings that witnessed the confederate invasion of York County still stand on Market Street. This tour leaves from  the Historical Society Museum, where guides will describe what events affected the town, and the roles some residents played.

Over 275 years of history await you on this tour, from the Colonial Complex, past the National House to Continental Square, past the beautifully refurbished Appel Performing Arts Center, and Quaker House. This tour covers the highlights of several different eras, while allowing you to appreciate the details of architecture and art that can only be seen on foot.

Scattered amongst the walls of York’s fabulous architecture, 18 murals depict scenes of the county’s proudest moments and people. Leaving from the Colonial Complex, guides will describe the background of 10 of them as you stroll down Market Street, George, and return via Philadelphia Street.

For a fuller appreciation of York’s History, the tours listed above can be combined. Following are suggested experiences.

If self-exploration is preferred, no guide is required at the Agricultural & Industrial Museum, Historical Society Museum, and Fire Museum

Please note that discount or free admission coupons cannot be used toward group tour admission costs. Groups arriving with less than ten in their party will be charged regular admission rates.

o     Due to the historic nature of the structures, the Bonham House, Colonial

Complex, and Fire Museum are not fully handicap accessible.